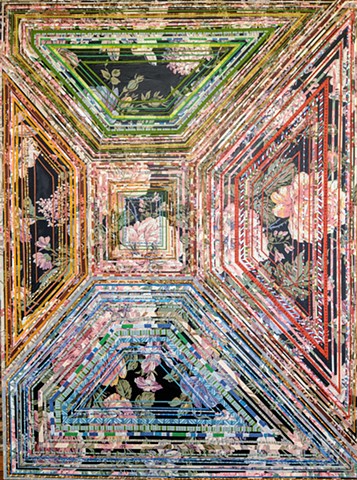 There is a connection between the way we conceptualize our bodies and the cultural narrative to which we subscribe. It is through my work that I attempt to delineate the specifics of this connection. Julia Kristeva’s writings on the abject have been influential to me when thinking about my work. In her famous essay, “Powers of Horror,” Kristeva attempts to define the abject in terms of the relationships that exist between the interior and exterior of the human body. She negotiates between the boundaries of what is acceptable and that which we must deny to continue living, or to continue to believe in a particular narrative.

My investigation centers on the creation of a binary system that questions constructs of feminine aesthetics by contrasting signifiers of feminine beauty and innocence with images that represent both the corporeal reality of the body as well as harsh realities of the social world. In the process, I fabricate plastic objects as well as use prefabricated domestic items, found images, and wallpaper. Transparency, scale, and light are devices I use to compress and re-contextualize images and objects of disparate physical and conceptual properties. The constructed binary system allows for the creation of objects, collages, and installations that present a world in which, for example, a cloud is juxtaposed to an intestine, a furry cat to a brain, mushroom clouds to flowers, and eyeballs become part of a benign and pacifying wallpaper pattern. In doing this I hope to produce in the viewer a sensation that the beautiful and the grotesque are more similar than they seem.